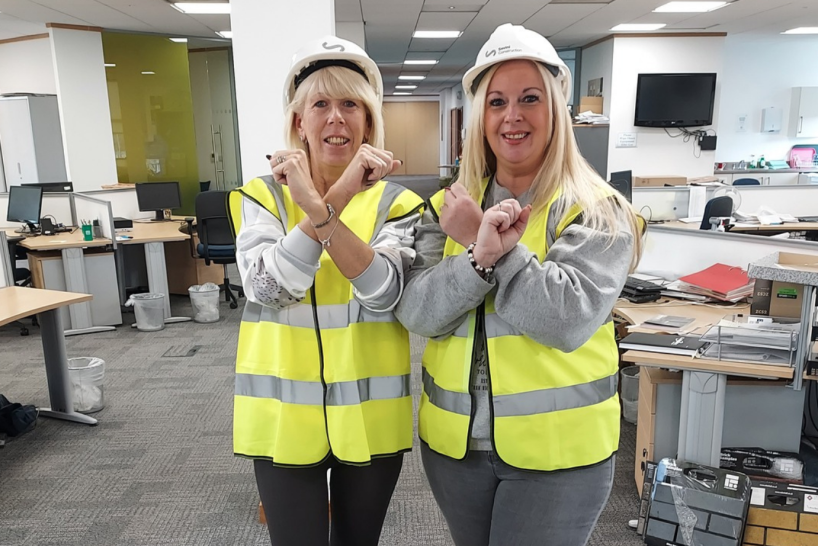 To mark International Women’s Day, we sat down with Sovini Construction colleagues Debbie Parry and Susanne Anderson. Both Debbie and Susanne are ‘pillars of the organisation’. Debbie is a Contracts Coordinator meaning she assistant on the sites in all aspects of document management and Susanne oversees all administration for Sovini Construction. As both women work in a predominantly male industry, with around 13% of the industries workforce being female, we have taken this opportunity to talk to Debbie and Susanne about what equality of genders means to them.

Why do you think it is important to celebrate International Women’s Day?

I think its important to celebrate International Women’s day to recognise the social, economic, cultural, and political achievements of women and to raise awareness about women’s equality. In today’s society we all like to think that gender does not matter these days and there is equality for all but unfortunately in many walks of life, this is still not the case. The day is about gender equality and should involve people of all genders being made to feel included.

I feel it’s so important to celebrate to recognise the achievements of women socially, politically and in the workplace.  Women still have a long way to go to be treated equally to men but I will always continue to celebrate this day at how far we’ve come and to be a role model to my daughter so I can continue to empower her. I find it can be a diverse subject, mainly the sole aim is about achieving equality. International Women’s Day is for men & women.  I love this quote –“A women’s place is wherever she wants it to be”.

How many years have you worked in the construction/scaffolding industry?

Over 10 years and although I am not directly involved in the day to day construction, I can see the positive changes that are happening now and hopefully will continue in the future as more and more women are being hired in what has always been a male dominated sector. I think back to my grandparents generation when the men all had to go off to war – the women were the ones left behind to carry on running the country and carrying out the jobs that had always been ‘roles for the men’. This was accepted then and the women did a mighty fine job but as the males returned, women returned to the female roles. Females proved then and are continuing to prove today that they should have a place in any sector if they have the ability rather than being judged on their gender.

Three years, Sovini Construction is my first experience of the construction industry. I was welcomed onto the team by everyone regardless that I was female working with predominately all men.

Why do you think diversity in the workplace is so important?

A diverse workplace acknowledges the individual strengths of each employee and the potential they bring, regardless of gender. Valuing the differences of others is what ultimately brings us all together and can be the secret to a successful, thriving workplace and a fair work culture. At Sovini Construction we have a strong team of individuals who blend together well because they respect each other’s abilities to do the job no matter what gender they are.

I agree. I am honoured to be part of The Sovini Group’s Equality Diversity & Inclusion Group and we use these groups to share our own experiences and discuss what we can do as a group to change lives and do the best we can to be a Diverse workplace.

What do you think is the most important change happening in the construction industry?

I think the construction industry is becoming a more equal society. For a long time, it was considered to be mainly suited to men, but this has now changed for the better and is now a suitable industry for anyone to work in.

What’s the best part of your job?

The best part of our job is working for an organisation who are committed to their staff. We literally are the UK’s Best Place To Work for Women.

Have you faced any barriers in your career being a woman in the Construction industry? If so, how did you overcome them?

I haven’t faced any barriers since working for Sovini Construction- I respect the team that I work with, and they respect me because of our work ethics, abilities and knowledge.

I have faced no barriers in my role, and I feel that if there were any obstacles I had to overcome, I would be supported to do this.

What advice would you give to other women who want to join the Construction Industry?

If you have an interest in the Construction industry and feel you want to be a part of it then you should have faith in yourself and your abilities. Just because you are a woman in a male dominated industry it does not mean that you are unable to succeed or progress as more and more companies are realising just how much women can bring to the industry and our worth.

DO IT !!! We need more women in Construction as this now reflects the society, we live in. Its great looking at all the new apprenticeships in The Sovini Group that offer roles for everyone.